A Little History / Families that established the Presbyterian church in Whippany/Hanover? NJ - Newark: Washington Park - The Indian and the Puritan

In 1695, settlers started living in the Whippany-Hanover area.  In 1710 a few families of New England ancestry (Puritans that left New England, seeking more God in government) living in the Newark and Elizabeth area moved to the Whippany-Hanover area and settled on the eastern side of the Passaic River.  Indians still lived in this region, and bears, wolves and panthers roamed the woods. The first iron forge, known today as the Old Iron Works, is established by these early inhabitants on the Whippanong (Whippany) River near the present intersection of Whippany Road and the State Highway No. 10.  This is the beginning of the iron industry in Morris County which, together with faming, forms it's economic base.  In 1718, a School Master John Richards (a Puritan dissident from Hartford, CT) donates 3-1/2 acres of land for "public use, improvement and benefit for a meeting house, burying yard and training field and such like uses, and no other."  The newly formed Presbyterian church drew it's congregation from a wide area, including Chatham, Madison, Parsippany and the western part of Hanover (Now called Morristown). 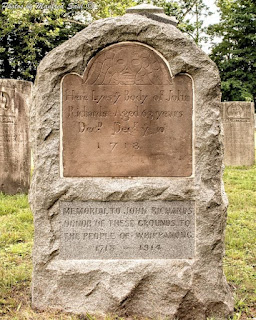